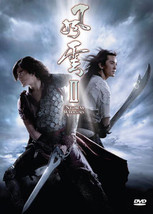 The Storm Warriors II added to cart. 5 available in stock Episodes Movie
Subtitles English & Chinese
Languages Cantonese / Mandarin//The evil Japanese warlord Lord Godless (Simon Yam) desires to conquer China. He threatens the General in command into surrender, takes the emperor captive and subdues a large number of martial arts masters using his special poison. Among the captives are Cloud (Aaron Kwok) who surrendered out of concern for Chu Chu (Tang Yan), and the Mou Lam legend Nameless (Kenny Ho). Lord Godless gives them two choices, they can either surrender and work under him, or they will be executed. None of the masters accept the offer. Nameless then breaks free of his chains, revealing that Ghostly Tiger, Nameless' assistant sneaked in earlier to give all the masters the antidote to the poison. Cloud and Wind (Ekin Cheng) land direct blows on Lord Godless with no noticeable effect, and even though several other martial arts masters combine their powers to attack Lord Godless, they lose the contest of strength and are killed. Nameless uses his special attack on Lord Godless, using his chi to launch all the captured masters' swords at Lord Godless, Lord Godless takes the attack head on and blocks all the swords while Nameless suffers serious internal injuries because he overtaxed himself while not fully recovered from the poison. Some other martial artists raid the prison on horseback and Nameless, Cloud, Wind and Chu Chu manage to escape, while Lord Godless sends his son, Heart and two lieutenants, Earth and Sky, after Nameless with an army, with orders to destroy any martial arts schools along the way who will not surrender.

Nameless is badly injured and will not be able to recover his full strength to fight with Lord Godless for a significant period of time, so he sends Cloud and Wind to find Piggy King's elder brother, Lord Wicked, who is the only person who can fight Lord Godless now. They go to the mountain where he has hid himself from the outside world but are unsuccessful in persuading him to help, until Wind's lover Second Dream shows up and aids in persuading Lord Wicked. Lord Wicked comes out of his cave, revealing that he had chopped off his own arms years ago. This was his attempt to stop killing innocent people because he had lost control of himself in his younger days while practicing evil kung-fu. He kicks some pebbles at Cloud and Wind to test how they react, Cloud crushes the pebbles totally while Wind only catches them intact. Lord Wicked states that Cloud is too aggressive and will not be able to handle training in the evil way, while Wind has more control and might be able to return to normal. Lord Wicked then starts training Wind in evil arts while Cloud is summoned to meet Nameless at Lin Yi Temple.

At Lin Yi Temple, Cloud fights a disguised Nameless, who states that Cloud has massive potential, able to accurately learn his styles in a short period of time, and trains him, eventually creating a new sword style which Nameless names "Ba", inventing a new character partially resembling the characters "Cloud" and "Sword". Lord Godless discovers where Nameless, Wind and Cloud have been hiding and dispatches Earth and Sky to kill Nameless while sending a few warriors after Wind. At the temple, Cloud easily defeats Earth and Sky in a single blow, but as Lord Wicked and the others are fighting off the warriors that Lord Godless sent, Second Dream gets injured and Wind interrupts his training to come out of the cave and save her, killing the warriors in the process. Afterward he leaves with his training unfinished, despite it supposedly not being possible to leave the pool yet. Cloud arrives to find Wind gone, and Lord Wicked sends Cloud after Lord Godless as he is trying to find the Dragon Tomb which contains a secret that deals with the destiny of China.

Lord Godless meanwhile has taken the Emperor and his family as hostages and is searching for the Dragon Tomb. The Emperor refuses to help him, but Heart is able to find out which path into the tomb is the correct one through the use of his chi that generated a massive wind when he picked the correct passage. Once at the end of the path, Heart starts threatening the Emperor for more information on the Dragon Tomb, but as he refuses to speak, Heart starts killing his wives and sons. Cloud arrives, and the guards which were Imperial Guards that were forced to surrender, switch sides instantly and pull the Emperor out of harm's way. Cloud and Heart exchanges blows, Heart backs off after the first exchange, and Cloud and Lord Godless starts fighting, Cloud initially has the upper hand but is unable to injure Lord Godless due to his near invincible armor. In the fight, a pile of rocks is blown away, revealing the entrance to the real Dragon Tomb, which contains a human skeleton sitting upright. Lord Godless almost kills Cloud in the next exchange of blows, but Wind, whom has been thoroughly possessed by the evil arts, arrives and fights against first Lord Godless, then Cloud, and then both of them, eventually killing Lord Godless by cutting off his arm from the underside of his armor, which was not as well protected and stealing the Dragon Bone, the secret of the tomb.

As Cloud chases after Wind, the Emperor begs Cloud to retrieve the Dragon Bone as it is crucial to the destiny of China. Second Dream eventually finds Wind at the secret place she had written to him in a letter about, but Wind just sits there with minimal response, and eventually the Emperor's guards arrive to try and take the Dragon Bone back. However as the General struggles with Second Dream over the dragon bone, Heart, which had escaped from the previous battle, grabs the bone and heavily injures the General, as the General and Heart struggle for the bone, it breaks into two and Wind gets fully taken over by the evil spirit again. Cloud arrives and fights Wind to try and bring him back, but fails as Wind eventually wounds Second Dream and also kills Chu Chu. In a final gambit, Cloud hurls his sword at Wind, cutting him on the forehead and Wind miraculously regains control. The cliff side has taken serious damage in the battle however, and a large section collapses, causing Wind and Second Dream (who walks over to check on her beloved) to fall off the cliff. Cloud is not in the section of the cliff that collapses. However, Cloud jumps off the cliff as well, manages to fall faster than the Wind and Second Dream, and exerts a force to push Wind and Second Dream back to safety. In doing so, Cloud plummets into the depths, but there is no scene of him dying. Sitting safely on the stable part of the cliff, Wind laments about why Cloud did not kill him earlier when Cloud had the chance. The movie ends abruptly at this stage.