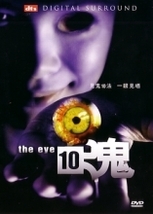 The Eye 10 added to cart. Only one available in stock 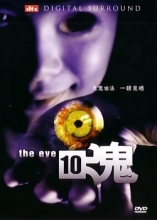 Episodes Movie
Subtitles English & Chinese
Languages Cantonese / Mandarin//In Thailand, Chong-kwai welcomes his friends Ted, May, Kofei and April from Hong Kong. While on a tour, they see an accident on the road and start telling ghost stories when they return to Chong-kwai's house. Chong-kwai shows them a book titled The Ten Encounters, that describes ten ways to see ghosts and spirits. Chong-kwai had purchased the book from a strange man, who offered him a discount, saying that Karma had led him to it, but Chong-kwai discovers later that he had been scammed. They can begin the "game" on any of the ten methods, but must complete it or else they will be haunted forever. Out of curiosity, the five of them start playing.

They start with the spirit glass game but only Kofei sees the ghost. Chong-kwai's mother, a spiritualist, appears and warns them about meddling with the supernatural. The next step involves them going to a road intersection at night to attract hungry ghosts. All except May are able to see the spirits, and the frustrated May insists that they continue the game even though they are already freaked out. They go to a forest to play hide and seek with a black cat, that will supposedly break the charm and allow them to see the missing person. However, Kofei had disappeared mysteriously and the cat is found dead. In anguish, April tries rubbing dirt from a grave onto her eyes, but they fall out from the sockets and turn fiery-red. She sinks into unconsciousness and Chong-kwai's mother saves her by cleaning her eyes, warning her that she was very close to the purgatory world. Chong-kwai's mother tells them to leave Thailand immediately but April stays behind because she wants to find Kofei (her boyfriend). One night, April tries one of the methods and brushes her hair in front of a mirror at night. Her fate is uncertain.

Meanwhile, back in Hong Kong, Ted and May continue to experience weird encounters. One rainy day, May finds an umbrella held by an invisible being while in the subway and she runs away. On the bus, her umbrella suddenly opens and she sees a basketball rolling back and forth. She steps over it and it turns into a human head, that starts biting her ankle. She screams in horror but her fellow passengers tell her that it is only a ball. While she is back at her apartment corridor, she sees the ball again and it starts to follow her. She performs a "peek-a-stoop" and sees a boy with a rotting face dribbling the ball. She dashes into her apartment in fear and calls Ted to come. While waiting for him, she receives a call about April's disappearance. Ted encounters many spirits on the way to May's apartment and he kicks the ball in the corridor and is possessed by the ghost. He jerks and twists his body and appears to be breakdancing. A pair of gangsters see Ted and think he is challenging them to a breakdance battle. Ted starts to walk on the wall and stand on the ceiling, while the horrified dancers and observers flee. Ted recovers and grabs a girl in the hallway, telling her to follow him into May's apartment, but she is nowhere to be seen later. After watching a video recording, they realize that the girl is actually the victim of the accident they saw in Thailand and her spirit disappears after Ted "peek-a-stoop" to see her.

Back in Thailand, Chong-kwai visits the bookstore to get answers from the man who sold him the cursed book. He sees that the drawings of characters in the book have been replaced by images of himself and his friends. His mother pulls him away before he can find out anything. At the same time, Ted and May return to Thailand to complete the game, hoping that the curse will be broken after doing so. They perform the last step, which is, to sleep while dressed in traditional garments for the deceased. Before that, Chong-kwai tells them that they have a limited time in the purgatory and must go towards a light when they hear a bell ring. In the ghost world, Ted and May encounter several ghosts and the spirits of Kofei and April, who tell them that they are actually dead. Ted and May attempt to escape towards the light, apparently succeeding, but they find out later that they have become spirits too. Chong-kwai and his mother attempt to revive Ted and May but fail. Before the film ends, the sinister bookstore owner is seen selling another copy of the cursed book to an interested teenager.