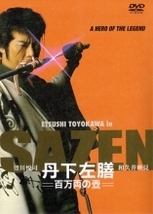 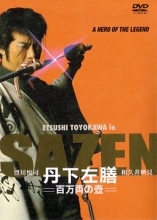 Episodes Movie
Subtitles English & Japanese
Languages Japanese//Details: Tange Sazen, a one-eyed and one-armed ronin was introduced in the pages of national newspaper Mainichi Shimbun by author Fubo Hayashi (1900-1935) in 1927. Due to its popularity, twelve feature films based on the character and his exploits were produced from 1935 through 1966.

This year the character was revived in director Toshio Tsuda's remake of the original 1935 feature Tange Sazen: Hyakuman Ryo no Tsubo (AKA Tange Sazen and the Pot Worth a Million Ryo). Dramatic actor Etsushi Toyokawa (Dog Star) takes on the role of Tange who is forced to give up being a samurai after being betrayed and wounded. With a comical tone, Tange deals with a nagging wife (Emi Wakui) while becoming involved with an orphaned child and a pot of one million ryo.

With the recent success in the genre of samurai film remaking, it seems timely to revive a forgotten master of the samurai films from early Japanese cinema.

Tange Sazen: Hyakuman Ryo no Tsubo is a remake of a classic 1935 film of the same name by Sadao Yamanaka. Tange Sazen, the one-armd, one-eyed ex-samurai swordsman is the creation of Fubo Hayashi, and was one of the most popular characters of the era. This remake is helmed by freshman director Toshio Tsuda, starring Etsushi Toyokawa as Sazen and Emi Wakui as Ofuji, his quick-witted wife. This marks the 34th film in the series of Tange Sazen, and this comedy of errors involves an Urn that is worth a million Ryo! With a witty script that combines Hollywood style storytelling with classical Japanese humor, it is a treat for film fans that Tange Sazen has finally returned to our big screens!