Great Revival (Beginning of the) 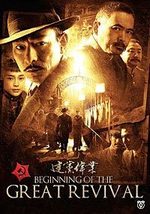 Great Revival (Beginning of the) added to cart. 2 available in stock 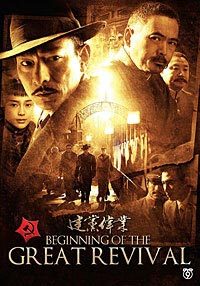 Weight 0.25 lbs
Discs 1
Region: All Region, 0 region
NTSC
Format: DVD
Episodes Movie 125mins
Subtitles English, Chinese
Languages Mandarin Beginning of The Great Revival DVD (Live Action Movie)
China, 1911. Following the Wuchang Uprising of 10 Oct against the ruling Qing dynasty, sixteen provinces declare independence and found the Republic of China on 1 Jan 1912. KMT leader Sun Yat-sen (Ma Shaohua), who returns from a trip to the US, is elected provisional president but later yields the post to Qing commander-in-chief Yuan Shikai (Chow Yun-fat), who agrees to pressure child emperor Puyi to abdicate. In elections for a National Assembly the KMT is victorious but Yuan exercises more and more influence in his role as president, forcing Sun Yat-sen to flee to Japan in late 1913. Yuan uses his military power to crush the KMT, dissolve the National Assembly and become Head of State, later taking the title of Emperor of the Chinese Empire. Yunnan provincial governor Cai E (Andy Lau) leads a rebellion against Yuan and forces his resignation, leaving the country with no effective leader and controlled by warlords. At the same time as growing protests by students and intellectuals, Sun returns to China in 1917 and heads a military government in Guangzhou. Meanwhile, in Changsha, capital of Hunan province, high-school student Mao Zedong graduates and decides to go to Beijing, where he studies part-time at the university and marries Yang Kaihui (Li Qin). In 1919 Mao returns to Hunan before a planned trip to Paris with other radicals. That year the May 4 Movement, triggered by anti-Japanese/anti-imperialist student protests in Beijing, erupts and later spreads to Shanghai. Mao decides at the last moment to stay in China. Eventually, in summer 1921, the Chinese Communist Party is founded in Shanghai by Li Dazhao (Zhang Jiayi), Chen Duxiu (Feng Yuanzheng), Hu Shi (Daniel Wu), Li Da (Huang Jue) and others.