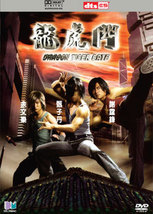 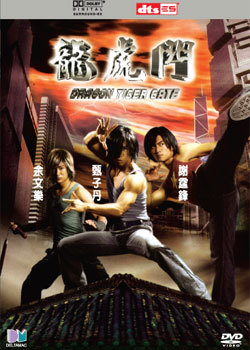 Episodes Movie
Subtitles English & Chinese
Languages Chinese//Adapting comic book storylines into feature films is not new in Hong Kong, and adapting styles from how Hollywood does things, isn't new to the industry either. The opening credits of the comic-book flipping sequence seem to announce that this movie is aping the standards set on comic book films in the West, as well as to set expectations straight that whatever is played out is pure fantasy, not Oscar winning material.
Dragon Tiger Gate is sheer Hong Kong fantasy martial arts indulgence. Not every movie in this genre makes the grade though. Feng Yun (Stormriders) was probably the pioneer with its fusion of fantasy martial arts moves and special effects.
The effects in Dragon Tiger Gate has shown a lot of improvement where Hong Kong movies are concerned, with digitized landscapes blending perfectly in scenes. The fights were effectively enhanced with plenty of CG, as well as good old reliable wirework. But nothing beats having well choreographed fist fights (by Donnie Yen) or just unadulterated martial arts showcase of skills such as the use of the nunchakus. Jazzed up with a Japanese influenced soundtrack, the action bits are the highlight of the movie, as the rest of the dialogue laden scenes were insipid and unfortunately applied too much brakes on the pace of the movie.
There are plenty of elements typical of a Hong Kong action movie, especially with the relationships with the opposite sex, like the token evil female character Luosha who falls in love with Dragon, in an uninspiring romance bit with a self-sacrificial theme, as well as the token goody-two-shoes female character Ma Xiaoling, the daughter of Dragon's triad benefactor who finds Tiger attractive.
Tiger Wong is a highly skilled martial artist with a strong sense of justice. At the yearly bun festival, Tiger realizes that a group of triad gangsters are bullying innocent people. Tiger, unable to stand by and just watch, defeats the gangsters using his special move ? Dragon Slaying Leg Eighteen, and accidentally grabs the garland from the top of the bun mountain winning the applause and admiration of the audience. Hidden in the garland is a gold medal.
It turns out that this gold medal is the Lousha token decreed by the leader of the Lousha Gate, Shibumi. ‘Gate’ is a word describing martial arts sect or organization and Lousha Gate is a criminal organization in Asia and whoever owns the gold medal has the right to demand the full cooperation of Lousha Gate. Tiger, unaware of the medal’s powers, is ambushed by the gang during his celebrations. As fate has it, he is saved by Dragon Wong, the bodyguard of one of the gangsters, who is sent to retrieve the medal. A blonde youth using nunchakus, Turbo Shek, also joins in to help them. Dragon retrieves the medal from Tiger. Tiger is shocked when he notices a jade pendant and realizes that Dragon is his step-brother.
Although Dragon is part of Jiang Hu - the complicated society of the martial arts world involving different Gates of evil and good, and working for a criminal gang, he has kept himself away from any criminal activities. After Dragon’s gangster boss Ma Kun returns the plaque to Shibumi he announces his retirement from Jiang Hu. Shibumi is angry upon hearing this news and sends his adopted daughter Lousha to destroy Ma.
In the meantime, Tiger has asked Ma Kun’s daughter Ma Xiaoling to help him inform Dragon that they are brothers. Xiaoling, who has already taken a liking to Tiger, agrees to help him. Dragon actually recognised him from the beginning but refuses to accept him. Lousha kills Ma Kun, but fortunately Dragon manages to fight his way out and escapes to Dragon Tiger Gate with Ma Xiaoling. Dragon hands Xiaoling over to Tiger and leaves, as he is unable to forget the past and so is unable to enter Dragon Tiger Gate.