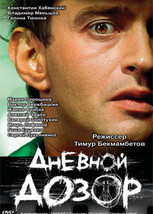 Subtitles English
Languages Japanese//It is New Year's Day of 2006, more than one year after the events of Night Watch. Anton Gorodetsky, the protagonist of the first film, finds himself in the middle of an approaching conflict between the Light and Dark Others, who are still bound with an uneasy truce. Anton is still a Night Watch operative, now working with his trainee and romantic interest, Svetlana. As his son Yegor has now become a Dark Other, Anton is forced to secretly destroy evidence of Yegor's attacks on normal people, which violates the treaty, leaving the Night Watch unable to sentence Yegor.

To redeem for his previous mistake, an attempt to use a witch's service to kill the unborn Yegor (shown in the beginning of the first film), Anton seeks the legendary Chalk of Fate, a magical chalk that could rewrite history, which was once Tamerlane's property and one of the main reasons for his numerous military successes.

Meanwhile, Zavulon, the leader of the Dark Others and their Day Watch, is waiting for Yegor's birthday. At the birthday, Yegor would become a Great Other and acquire the power that would allow the Dark Others to break the treaty (which is only supported because the Others fear that the two sides will destroy each other). Zavulon's gratitude to Anton for covering Yegor's violations of the treaty doesn't stop him and the Day Watch from attempting to frame Anton for murder and bring him in front of the Inquisition. They succeed, despite the efforts made by Geser, the head of the Night Watch, to protect Anton from the Dark Others by putting him in Olga's body. While in her body, Svetlana confesses that she loves Anton to the person she thinks is Olga, which pushes their relationship forward. This happens despite Svetlana's initial anger at Anton for not telling her that he was in Olga's body.

Anton obtains the Chalk of Fate from its hiding place in a Central Asian cafe in Moscow and uses it to summon Yegor. They initially get on well, but Yegor is resentful when Anton refuses his request to patch things up with Yegor's mother. Anton puts his large coat on Yegor, who seems to be cold, and leaves to order food. At this time, Svetlana rings Anton's mobile, which he left in the pocket of the coat, and Yegor, angry at her intrusion into his relationship with his absentee father, yells at her, "He has a family. Don't call again." He smashes the phone and leaves with the chalk, which he takes to Zavulon. Zavulon cannot use or even touch the Chalk, because doing so would be a direct violation of the treaty, so he has Yegor give it to his minion/lover Alisia to do with as she wishes, although it is implied that Zavulon knows what she will do with it.

Yegor's birthday party begins soon after that; the guests are Dark Others (some of them are Russian pop stars), although Anton makes his way to the party as Yegor's father to expose the real perpetrator of the murder he has been charged with - his vampire neighbor, Kostya's father. He is unable, however, to avert a disaster: as Svetlana rushes to the party to find Anton, Yegor confronts her. She tries to avoid a conflict but Yegor repeatedly challenges her and expresses resentment at her relationship with his father; Svetlana accidentally strikes Yegor and spills a drop of his blood, which Zavulon interprets as a violation of the Treaty and thus uses as a pretense to declare all-out war on the Light Others.

Yegor, now a Great Other, unleashes an apocalypse upon Moscow, killing most of the guests and blinding Svetlana. The city is nearly destroyed, starting with the Ostankino Tower; a fierce battle between the Light and Dark Others follows, with few survivors on either side. In the midst of the chaos, Anton, who survives, finds Alisia who is trying to revive her dead lover, Kostya, but without success. She cannot revive him because her actions did not cause his death. The scene implies the user of the Chalk can only change decisions that he or she made, not anyone else's. Anton convinces Alisia to give him the Chalk so that he can prevent the destruction of Moscow and the deaths of scores of Others, but is almost immediately caught by a panicked Svetlana and an enraged Yegor. The two Great Others fight for Anton, but nearly kill him in the process. Saved at the last minute by Geser, Anton runs through the ruins of Moscow to the house where he, fourteen years ago, made his visit to the witch — the visit that caused the entire sequence of events, starting Anton's own initiation into the Night Watch. Anton writes NO (???; pronounced nyet) on a wall in this house. Moscow reverts to its normal, undemolished state and the film returns to 1992 and the first scene of Night Watch.

In the epilogue, as a result of the Chalk's influence, Anton rethinks his deal with the witch, and therefore never inadvertently agrees to harm his wife's unborn child, who would have been Yegor. He walks out of the house and into the street, where he meets Svetlana. Zavulon and Geser watch them from a park bench, eager to see if Anton will recognize Svetlana, despite now having never met her because of the rewriting of history. Geser's prediction turns out to be accurate; despite not knowing how or why, Anton recognizes Svetlana and they walk off together, implicitly striking up a less harried relationship than the one they have/had in the first two films.