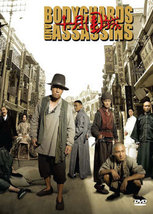 Bodyguards and Assassins added to cart. 5 available in stock

While the first half of Bodyguards and Assassins sets up the revolutionary cause, the action-packed second half rolls out the brutal confrontation between the bodyguards and the assassins. The rickshaw must keep moving, no matter the cost, as the Tung Wai-choreographed action and chase scenes play out in almost real time through a massive set that stunningly recreates early 1900s Hong Kong Central District.