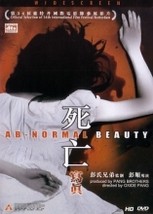 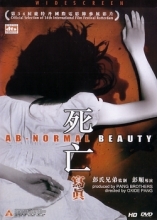 Subtitles English & Chinese
Languages Mandarin, Cantonese//The Eye made the world take notice of twins The Pang Brothers, and now the duo take on the role of producers in a film starring sister-act 2R and directed by Pang Shun! The film follows the usual thriller suspense style that made the Pang Brothers famous, Ab-normal Beauty deals with a young woman suffering from psychological disorder, and with 2R's debut they break with their girl-next-door image to take on violence and provocative scenes, making this film ever more special.

Ab-normal Beauty is shot mostly in Thailand, and the story evolves around a picture of an accident and a haunting memory from childhood, that slowly drives Wing Kay (2R's Race) to insanity! She begins to develop an obsession with taking photos of death, slowly unlocking the violent tendencies within her, but to Wing Kay, she believes she is developing art...

An intervention by her close friend Bak Pay (2R's Rosanna) makes her realize her wrongful ways. At the same time of her awakening, a killer begins to approach Wing Kay, with the killer's behavior identical to her own! This made her go back into the dark path, and she isn't the only one! Thus begin a psychological war between the killer and the hunter...